You might have known, but trout are not native to South America, but were introduced during the early years of the twentieth century, and in the case of Chile some years even before that.  Like many introduced species (think rabbits in Australia) if there is a niche to be filled or available in the environment,some specie will often fill it if given the chance.  That’s exactly what happened in Argentina.  Trout exploded across the landscape once introduced. Patagonia,with its clear, cold waters and abundant food was the perfect setting.  Trout easily outcompeted the native perca, or perch, that inhabit the rivers and lakes, and pushed them aside.

With the construction of a hatchery (rearing station) in San Carlos de Bariloche in 1903, the early years between 1904 and 1910 saw eggs annually

shipped from North America and Europe that led to Maine and New York brook trout, California McCloud strain rainbow trout, and landlocked salmon from Maine’s Sebago Lake region introduced into the waters around Lago Nahuel Huapi.  Followed shortly by browns from Denmark, Northern Patagonia’s assortment of trout has become what we see today.  These early trout eggs were shipped by steamer from New York to Buenos Aires, then by train across the country to Neuquen.  The railway ended there, so the last 300 miles was by wagon. By 1980, all egg importation had ceased.

You’ve probably had enough of this brief history lesson on South American trout, but it’s important to know the source of your enjoyment when you next set the hook on a Patagonian river or lake.

Perhaps a more relevant question is how did trout become so wide-spread in the course of a short century or so?  Well, look closely at the rivers of Patagonia and you’ll find few dams. Once a species was introduced almost anywhere in a watershed, it easily colonized the entire area with ideal water temperatures and food supply, and virtually no predators. 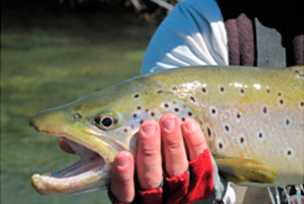 For example, in the Rio Manso Lodge area, we have the Manso river connected to a number of lakes including Fonck, Roca, and Mascardi, and also to Steffen down river, and then west all the way to the Pacific Ocean.  Few barriers exist between these waters to prevent fish from exploring the entire system.  A fascinating fact here is the Manso drainage ends up in the Pacific Ocean.  Nahuel Huapi and the Rio Limay are all on the Atlantic side of the continental divide.  When you drive from the Bariloche airport to the lodge, you’ll cross that divide probably without even noticing.

So there you have it, a brief primer on Patagonia trout history.  The next time you’re sitting in an airport with your friends waiting for that flight to take you to Rio Manso Lodge or some other Argentine trout nirvana, you can pontificate on the origins of Patagonia trout, and seem much the wiser to your trouty amigos.