The Brown Trout of Patagonia

Last week I wrote about the brook trout that swim in the waters surrounding Rio Manso Lodge, and I tried to convey the strong attraction and feeling of nostalgia many anglers have for this fish.  Well, as true as that might be, we’re on a totally different track this week talking about the gran truchamarrón that swim in Argentina’s waters.  Comparing brook and brown trout feels like arguing the merits of a Vespa versus a Harley Davidson, or a Toyota Prius and Porsche 911.  There ain’t no comparison is what I’m trying to say.  Don’t get me wrong, brook trout are one of my all-time favorite fish to catch. 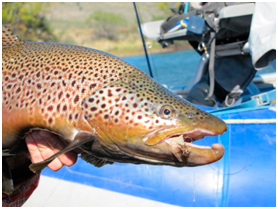 their diet gradually switches from small insects to larger food items, including some of their cousins, smaller brook, rainbow and even other browns.

Here’s a good example: fishing one day with Javier Mesas, one of Rio Manso’s top guides, we floated a section of the Manso and pulled over to the shore to work an especially attractive bank protected by big, over-hanging coihue trees.  This evergreen’s large branches often extend 25 feet or more out from the bank, and provide the deep shadows that browns love.  I was methodically casting a streamer under the trees along the bank when I felt a strike and set the hook.  It was pretty obviously a small fish as I saw a flash of silver indicating most likely a small rainbow, and although I wanted to land it quickly, the line caught on a section of tree branch that bent into the river.  I could feel the trout struggling against the pull of the line and the power of the current.  I twitched the line a couple times to release it from the tree.  Suddenly, that pressure changed completely as the line pulled free of the branch.  My rod doubled over and I now had a totally different fight on my hands.  Javi looked at me like I was crazy, “What are you doing, Juan?  Just land that little fish.” 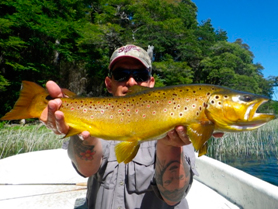 A minute or so later, we both got a good look at a big brown holding a small rainbow in its mouth like a dog with a bone.  My fly was stuck in the little rainbows mouth, but the brown refused to let go of his dinner.  We didn’t quite land that 20 inch plus brown, but Javier almost got him into the net because of greediness.  And that little rainbow swam away, albeit with a few tooth marks in his side.  Only a brown…. 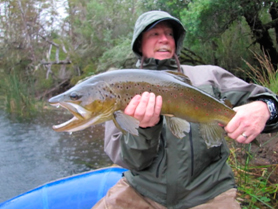 During the dragon fly hatch, big browns cruise the shoreline of the lakes, and stakeout prime spots in the river to feast on this highly desirable source of
protein.  It’s not unusual to see 4-5 pound browns leap clear of the surface in an attempt to grab a dragonfly on the wing.  Picture size 4 dry flies on 2x tippet and you’ll begin to get the idea.  If you can get to Rio Manso when this hatch is in full swing in December or January, you’ll have some of the most exciting dry fly fishing of your life. 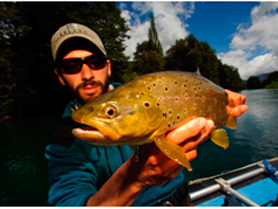 There are a few times when big browns will sip dry flies, and often that occurs in the Channels in front of the lodge.  This spring creek-like section of the Manso holds some of the largest fish in the watershed. Evenings spent stalking trout here remind me of fishing the Henry’s Fork in Idaho or the Delaware in New York.  Except for one thing.  There isn’t another angler to be seen.  There are other times of the year to catch the biggest, nastiest, most belligerent brown trout, and that’s the fall.  But that’s a story for another time. 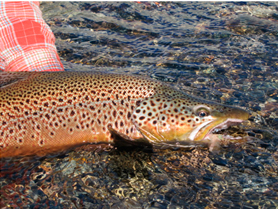 The Other Fall Fishing Frenzy

The Monster of Rio Manso