It’s all part of nature and makes me feel like there’s If you have fished long enough, you’ve probably seen some pretty crazy things. I’ve seen osprey attack hooked fish, black bears with cubs suddenly appear 50 feet away, and mink walk across my wading boot. a whole natural world that I just get to catch a glimpse of when I shed my civilized coat and enter the forest.  In the wilds of Patagonia, it’s even closer.

I guess what happened the other day on the waters of the Rio Manso could fall into that category; a fluke, a coincidence, a twist of fate.  Nothing bad or ominous about it, just something out of the ordinary. 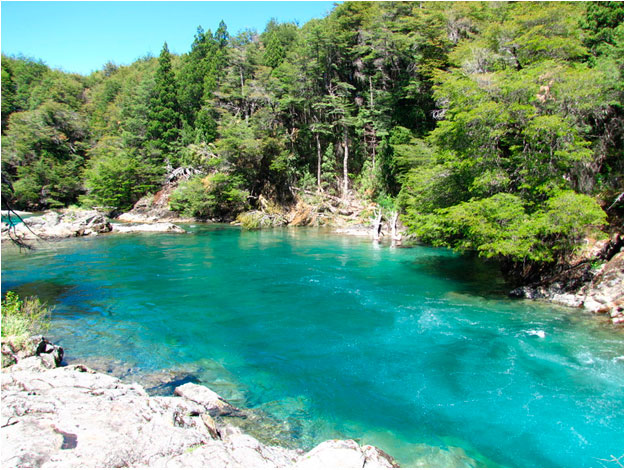 I was floating the river with Noah, the son of an old friend from Salt Lake City, and Diego, one of the outstanding guides at the lodge.  We were having a good day, and we’d already had a hint of the kind of events that make a day stick in your memory long after the sun has set.  Early on, we caught a couple of nice browns, one so close to the boat along the bank that it was difficult to think he hadn’t seen us.  Despite being just feet from the raft in inches of water, this fish maron calmed sucked in a small streamer.  Other fish followed, and with the Patagonian gods providing a nice day, we were having a satisfying time. 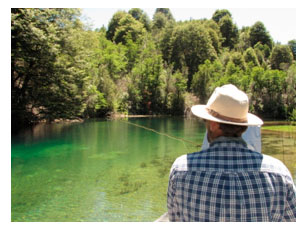 After negotiating some rough water, and portaging around a nasty bit, we approached a favorite spot on this beat of the river.  Tucked away from the main channels of the river, this old channel held crystal clear water and a small spring in the corner that created a spring creek-like environment.  It’s a favorite place to stalk trout where stealth and accurate casting aren’t guarantees of success, but the first step in any chance to succeed.  Surprisingly big trout, usually browns, cruise the sandy bottom here and small flies and light tippet are required.

I spotted a 20 inch plus brown in inches of water, resting and feeding occasionally on something small.  We put Noah on point, and he slid into position.  With Diego and me over-coaching, the pressure was on Noah to make the perfect cast.  Somehow, despite the constant stream of casting, wading and fishing directives, he managed to pull it off.  Nothing.  The fish didn’t even show interest in the first fly, but he didn’t spook either.  A quick fly change and Noah had another shot at it.  The fish slid forward to look and seemed to be interested.  We all looked at one another.  “Did he eat?”, Noah and I asked together as he lifted the rod and the line went tight on 5x and a #22 nymph.  “All right!”. We didn’t land that fish, but Noah got the best part of the fight.

Yet that wasn’t the strangest thing to happen that day.  We were all feeling good after a morning of steady fishing, the spring creek distraction, and a fine lunch in the shade, and for me, the temptation of a siesta after a couple glasses of Malbec, de rigor when fishing in Patagonia.  We fished the lower part of the beat, coming to a large pool where Diego and I remarked on the fact that we have never caught much beyond a few small trout here.  There used to be a nice back eddy where rising trout would hold next to the bank, but current changes over the years seemed to have lessened the attraction of that spot.

I had made a cast in that direction, when a small 11-inch rainbow raced after my twitching streamer.  Just as he grabbed it, a monster brown came seemingly from nowhere and grabbed him!  We all watched in fascination as the brown held on firmly as I played them both.  Twice, I leveraged the brown to the surface where we could plainly see my streamer in the rainbow’s mouth, and only the brown’s tenacity connecting him to my line.  Twice, he bore down to keep his prize.  Diego was ready with the net and we nearly got it under the ferocious brown, a trucha pushing 10 pounds.  As the boat drifted into a tangle of logs and tree limbs, Diego had to grab the oars and abandon the net to keep us safe.  With one last heave of heavy pressure, I tried to get the brown out to the gunnel, but he finally realized the danger and abandoned his dinner.  It happened fast – no photos, no video – but the image of that giant brown is frozen in my memory, and those of my companions.  The rainbow?  He got to swim home with a few scars to show for it.  That brown?  I know where he lives and I’ll be back.  I just have to tie a 10-inch rainbow fly.  Now, where did I put the extra-long hackle….